Last week, in one of my pre-school piano classes, we had a breakthrough, something I’d been waiting for since they all started at Easter…one little girl had a “song in her head!” Now, this may not seem very significant, but to me it was… during their “free play” times I had been asking “has anyone got a song in their head?”… and I’d been met with a range of facial expressions, ranging from “what are you on about?” to “have you really lost the plot!”

Anyway, last week she raced in, screeching in the highest voice imaginable, “I’ve got a song in my head”…and she had! It was about a butterfly she’d noticed on a bush in her garden. Now, most rhyming songs can be set to music using just “so(or sol)” and “mi” and maybe the odd “la”, so I set a rhythm pattern and we all sang the song, and then transferred it to the relevant notes on the piano. It worked a treat and she couldn’t stop grinning!

Children really learn a lot from each other, so I expect an influx of songs next week!

Now, why do I put such emphasis on developing the musical ear and inner hearing?

When I was at university, I took a module taught by John Blacking, a renowned professor of ethnomusicology. Little did I know then, that his views would become so important in my teaching of music to very young children…he believed that children have a musical culture all of their own, and rather than always TEACHING them, we should listen to what THEY have to say, musically.

For that reason, I put great emphasis on letting even the youngest children compose very early on, allowing their own rhythms and songs to develop, uninhibited, and giving them an outlet for the “Songs in Their Heads”. 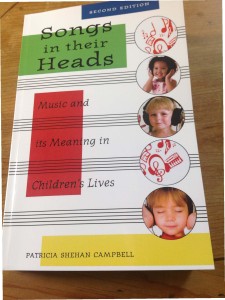 Songs in Their Heads: Music and Its Meaning in Children’s Lives. Buy it here: Amazon

Patricia Shehan-Campbell, author of the book “Songs in Their Heads” has been described as following in the footsteps of Professor Blacking. Through talking with children and listening to their activities, she examines music and its role in their lives…”what are these songs in their heads, where did they come from, how do they sound, do all children have them”…just some of the questions she poses.

One young boy, Alan, “finds himself singing in his mind during other classes…and his “humming music” visits upon him various melodies that he will later try on his keyboard.” (Page 180)

By allowing the musical “ear” to develop naturally through songs, play and composing when they are very young, I find children approach the later tasks, such as learning to read notation, in a much more musical way. 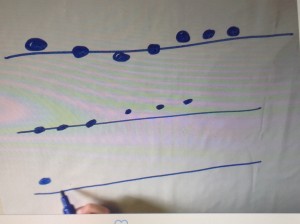 In a recent lesson, this 6 year old is starting to read musical notation…how confusing it all must be, with notes and stems going up and down, sometimes coloured in, sometimes left blank..etc.etc..

Nowadays, I tend to break it all down…this little boy has been playing a lot “by ear” and singing melodies, working out if the music goes up or down, and now we are moving on…

Starting with just one line and the spaces above and below it, he hums the “song in his head” and then places the musical dot in the relevant place…all the while his inner hearing is working and he relates the music to the concept being taught. Gradually we will add more lines and spaces, checking as we go that the concept is fully grasped.

Going back to Alan again, I love this quote of his…it is very perceptive for one so young… “I sing in my mind, not out loud, but my inside-singing is my guide to playing.” (Page 176)

What’s on in the next few months..

Let me tell you a ‘story’… »
« Piano Teaching in the future… (this might shock you!)

You can find out more about which cookies we are using or switch them off in settings.

What information will we use?

Unless otherwise agreed with you, we will only collect and store basic information about you via the contact form on this website. The information collected is your name and email address. At a later date, if a contract for our service has been agreed, you have the option to provide a phone number as a means of contact.

Why do we need information?

We need to know basic personal data in order to reply to you and supply information relating to the service about which you have enquired. We do not collect any data which we do not need.

We will keep your data secure only for the duration of the lawful purpose for which it was obtained. After this it will be safely destroyed.

We must inform you that you have the right to refuse consent and to view, amend or withdraw any personal data held about you at any time. In such a case, please email our data protection officer at info@hilarycrawfordteaching.com and we will withdraw your data as soon as possible.

Strictly Necessary Cookie should be enabled at all times so that we can save your preferences for cookie settings.

If you disable this cookie, we will not be able to save your preferences. This means that every time you visit this website you will need to enable or disable cookies again.